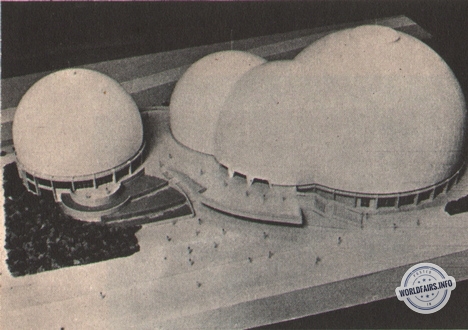 The pavilion of the French Republic was a living exhibition of the originality of the French personality in the contemporary world and of the national determination for further progress.

The pavilion consisted of four domes - three overlapping and one free-standing - the largest of which was 31 metres high. All white, they glowed night and day with 1500 flashing lights.

The pavilion was surrounded by lawns and flowerbeds and at the base of the dome, which was not attached to the others, was a waterfall beautifully lit in the evening hours.

The theme of the French pavilion was centred on technical and economic independence in international cooperation; on mastering the future of scientific research and attention to the problems of youth and on the protection and development of French individuality, and on cultural activity and a unique concept of life.

During the visiting hours, these themes gave you a reflection of the French way of life and the French contribution to human progress. Paris was represented in an important section, called "La vie du Français", where you could discover what made Paris the "City of Light" with all its charm and grandeur.

A Franco-Japanese museum reminded you of the relationship between the two countries since the 17th century. But art and culture were integrated throughout the pavilion and an exceptional library served the intellectual needs of the most demanding.

A 200-seat auditorium, fully equipped for live interpretation, was available for lectures and other activities. And a French restaurant and a "Grand Café" gave you the opportunity to taste the famous French culinary art.