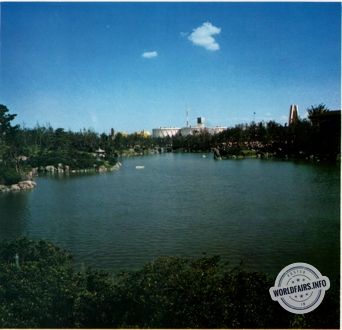 Japan is famous for its gardens as well as its classical architecture.

The Japanese garden at Expo'70, in the northern part of the site, is an area of quiet, simple, natural beauty, pleasantly contrasted with the glitz of the technology pavilion sections. But this area is also a visual demonstration of Japanese gardening techniques.

The Japanese garden is designed to create a world of "harmony between nature and man". A stream winds through the garden from west to east, following the course of Japanese gardening techniques from ancient times to the present, from the Jodai, Chusei and Kinsei periods.

Some 1.3 kilometres (0.8 miles) long and 200 metres (about 650 feet) wide, the Japanese garden slopes gently to lead its waters eastwards. The basic idea is "flow", the natural flow of water through valleys and plains, both symbolic of the flow of time and the progress of man through the areas.

A guest house for visiting heads of state and other distinguished guests, in the far west, in the Jodai section, in classical style in harmony with the garden. Fir trees, black pines and other conifers surrounded it, creating the atmosphere of a mountain in ancient Japan.

Nearby, from a fountain on a cliff, the stream gushes out, which will soon be divided by a hill planted with Japanese black pine and various species of azaleas, typical of the Kansai region. On this hill is an observation tower as well as a rest house and a tea house typical of medieval gardens of the time.

The stream arrives at a long sandy beach suggestive of the origin of the "stone gardens" unique to Japan. Then the waters flow into a large pond of 11,000 square metres, north of the icon area. A combination of the hill and the pond represents the style and technique common in the early years of the Edo period.

At the eastern end of the garden is the modern area with its series of ponds, including a carp pond, a lotus pond and an iris pond, and a terraced flowerbed. Here, as in the Japanese garden, resting and walking areas abound for the comfort of walkers.