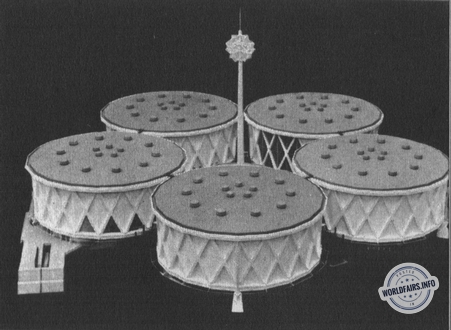 As the host nation, Japan built by far the largest pavilion at Expo'70.

Five tall drum-like structures surround an 80-metre (260-foot) high tower. From above, the grouping resembles a cherry blossom, which is both the emblem and the flower of the National Expo. Each of the five halls is 58 metres (90 feet) in diameter and 27 metres, nearly 90 feet, high.

The Japanese Pavilion tells the story of how the Expo'70 theme, "Progress and Harmony for Mankind", sprouted and blossomed, like a cherry blossom. Exhibits, therefore, emphasise the 'progress' that has made Japan's historical development more than just a 'time lapse'. You see the contemporary industry and culture and the hopes for the 21st century. Exhibitions also highlight the harmony of a Japan that has taken advantage of both Eastern and Western cultures and has built on this dual characteristic a dynamic and unique culture.

Therefore, exhibitions are organised in the three sections "Yesterday, Today and Tomorrow", Mukaski, Ima and Asu. It is understandable to begin with that you follow the flow of history by entering through hall 1 and proceeding clockwise through the other halls.

After being transported down the 42-metre, almost 140-metre escalators to the bottom of the tower, you are in Hall 1 and the Mukashi section, 'the past'. Photos, reproductions and other media show the history of Japan. From time immemorial, as represented by the clay doll "Haniwa". In the past, when an aristocratic culture followed the introduction of Buddhism. The Kamakura and Muromachi eras: the absorption of the Chinese Sung and Ming cultures and the creation of Japan's own Zen culture. The Azuchi-Momoyama era, the "golden culture". The Edo period, with its merchant culture. And the Meiji period, which introduced Western culture and the contemporary era.

Hall 2, under the theme, Ima or Today, bears witness to the large scale and dynamic growth of Japanese industry and the energy of the Japanese people. A giant steel wall, in the shape of the rear section of a 300,000 tonne tanker, symbolises this rapidly growing industry. Its surfaces incorporate screens and models. This room also shows the daily life of the Japanese and their constant progress.

Also, under the theme of Ima, Hall 3 focuses on the sun and water. There is "Japanese nature and its use" and an exploration of the relationship between nature and man. There is a "forest of statistics" showing, through slides, the population, industry and life in Japan. There is the "Sea of Japan" where you can enjoy a simulated underwater journey and learn about the fishing industry and wave power generation.

Hall 4 is a kind of place where the latest technologies from Japan are presented: a linear motor car, items to explore Antarctica, an earthquake-proof structure. In addition, the "Little World Hall" shows you what is happening in 17 places in the world at the same time and "Illusions" tests your sense of balance.

You enter Hall 5. Asu or Tomorrow, the theme and film is called "Japan and the Japanese" which is the main attraction. It is displayed on a giant screen, 48 metres wide (157 feet), the production became possible only with the development of an eight optic camera of a quite special type. Among other features of Tomorrow is "Japan in the 21st Century", four research organizations use animations and models that envision an ideal Japan in the future.