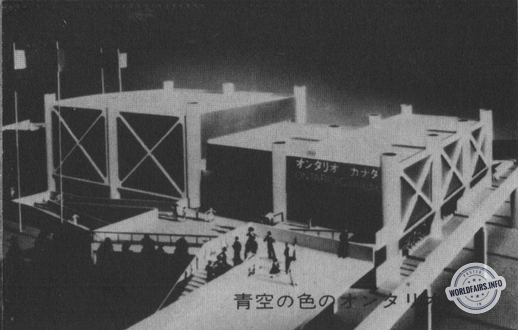 Canada's most populous and prosperous province has a dramatic 70mm colour film made by Christopher Chapman, the Ontario producer-director who won a Hollywood Academy Award with his film for the Ontario pavilion at Expo 67 in Montreal.

The Ontario pavilion, which occupies a 31,000 square foot site, is a blue and white structure made of prefabricated steel panels and cylindrical steel posts. The two-level pavilion is a modern example of rapid construction and assembly techniques.

Inside, the presentation is entirely audiovisual. The film shows the people of the province in a festive spirit, as well as some of the beautiful nature shots, including the impressive Niagara Falls.

Another exhibit is an innovative multi-display presentation that greets visitors after they enter the pavilion. It is a dazzling 12-minute sequence of colour photographs projected by a carousel of 26 projectors. The history of Ontario's wilderness, rural suburbs, urban development, production, construction, transportation, communication, education, recreation and spiritual life is seen on a 30 metre (98 foot) long screen. The radically different equipment from what is normally used is projected and is known as the Modular Communication Vehicle, the first of its kind.

The film, the second part of the pavilion's exhibition, is shown in a cinema with a capacity of 525 people. The large screen is 27.5 metres (90 feet) by 11 metres (36 feet) and in a 120-degree parabolic curve to give the impression of enveloping the audience.