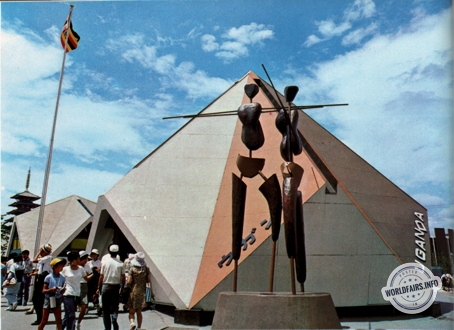 The Uganda pavilion was easily identifiable in the middle of the colourful African section of the expo, approaching it from all angles, you could make out "Uganda" written in large, bold letters.

It was an appropriate bold identification for this land in the heart of Africa. The triple-tent design of the Uganda pavilion showcased the sunshine, soils, lakes and wildlife that this country is blessed with. Indeed, this nation includes part of the famous Lake Victoria, and through this lake pass waters that reach the Mediterranean as the mighty Nile.

At the entrance to the Uganda pavilion, in addition to the offices of the Commissioner General, there was an information desk and a sales kiosk. At the kiosk you could buy trinkets and handicrafts in a traditional Ugandan environment.

We moved on to the Uganda Tradition Room. Here, all the glory of the country's traditional past was on display through music, dances, colour films and unique artworks.

In the Wildlife and Tourism Hall, the heart of wild Africa was represented by three-dimensional models of unique playgrounds. Perfectly recreated, including the life of the animals, giving the feeling of being truly present in this beautiful and bountiful nation.

The hall of modern Uganda gave you an idea, through its modern light displays, of the country's major industries and the economic and educational achievements that were already playing an important role in the life of Uganda.