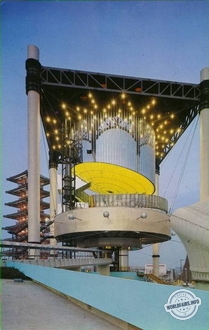 The night was only the time to see the Electricity pavilion. It was a huge structure. But at night, the shiny surface reflected a multitude of colours with the effect of a large and beautiful lamp.

This lamp, the pavilion also known as the Electrium, was a 1200 ton structure suspended by 16 steel cables attached to four 43 meter high columns.

The visitor was first taken by lift to a 500-seat aerial theatre on the top floor of the pavilion to see "Sun Hunter".

Projected on 5 screens, this film presented man's dependence on solar energy; the film showed the different sources of energy exploited by man, starting with the mastery of fire and ending with the development of nuclear reactors.

On the first floor, in the centre of the Electrium, the theme "Man and Energy" was presented.

After leaving the main structure of the pavilion, the visitor sat in one of the 400 seats of the Floating Theatre, where magicians revealed the new and fascinating aspects of electricity. A tent was supported by three large inflatable arches, this structure was built to rotate in a pool during the show.

The Electrium, the Electricity Pavilion, was the result of the combined efforts of the members of the Federation of Japanese Electricity Company.

The pavilion and its various features were designed and built to enhance the image of the electrical industry as well as to build understanding, confidence and familiarity with the industry.

The pavilion could accommodate 1,800 visitors at a time, and the time interval for the full tour took 50 minutes.