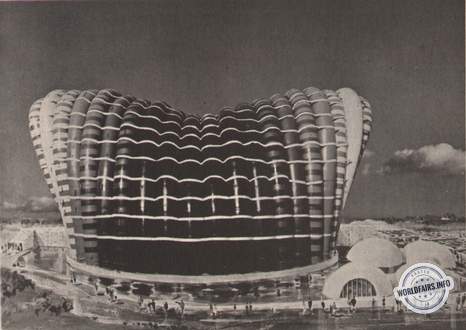 Directly adjacent to the Thursday Plaza was a new "Building".
"Message to the 21st Century" was the theme of the Fuji Group pavilion. This modern message began with the building itself, the world's largest inflatable structure.

Sixteen vinylon tubes, each four metres in diameter and 80 metres long, were assembled to create the pavilion.

The resulting shape was something like a boxcar. The resulting space was immense, the pavilion could hold a 10-storey building. Several years of research went into the creation of this structure which may have applications in the future, in space, for underwater work and in the cities of the future.

You are afraid of Japan, famous for its typhoons. The pavilion, by changing the air pressure inside, can withstand winds of over 214 km/h.

This pavilion is easily visited on foot. By entering through a gently sloping bridge that crossed an artificial being and walking on a large turntable. The turntable rotated the interior of the pavilion with one revolution every 20 minutes.

As the platform rotated, the visitor entered into total darkness to witness what the pavilion's sponsors called "The Total Experience".

This film combined light, sound and movement in a computer-synchronised presentation.

On a large screen, a 210 mm film was projected by new equipment. At the same time, 28 special projectors projected images onto the ceiling and interior walls. The aim was to create a feeling of being transported to a different and new world.

After the show, visitors went to the first floor via the escalators to see the machinery that broadcast and projected the show.

The Fuji Group was one of the 36 leading companies in Japan.