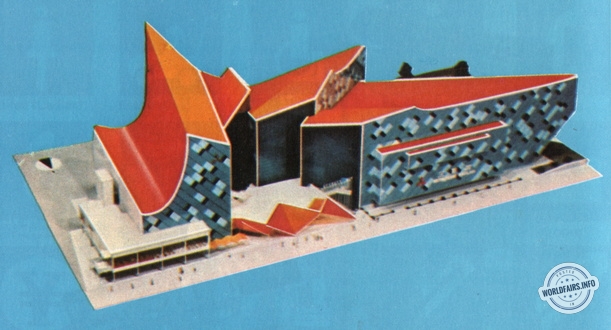 The Mitsubishi pavilion provided a glimpse of the Japan of tomorrow as imagined by one of the country's largest industrial and financial groups. It was a prescription for how harmony between science and nature could be realised.

The theme of the pavilion was "Japan's Nature and Japanese Dreams". In the first of five sections, you were surrounded by violent storms, floods and volcanic eruptions. This wilderness experience was created by a mirror screen "Hori", in association for the development with Mitsubishi and the technical laboratories of "Toho" film studios. As an extension to the three-dimensional sensation, a blue sky suddenly revealed itself and let the rotating earth appear as if you were travelling in space.

Then you passed through a transparent tunnel and covered a futuristic weather control station that allowed you to understand the typhoons created in the southern seas. Then came a journey on a conveyor belt, called "travators", to the bottom of the sea and a wonderful underwater city.

The fourth section was dedicated to the idea of science in 21st century Japan. The displays included a living module, you could look through the window of this "house of tomorrow" and see fantastic scenes of a new Japan.

In the last section, you could participate in creating your own future. In a large hall dedicated to recreation, many unique devices allowed you to create your own vision of the future. And thanks to the various conveyor belts and moving walkways, you had visited this entire pavilion in half an hour.