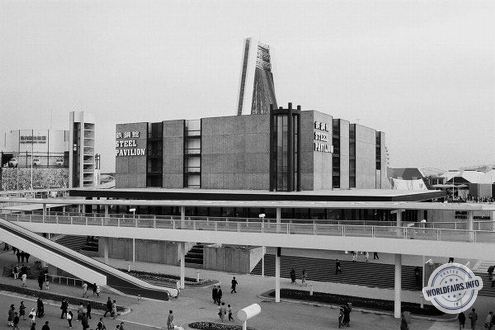 "Japan Iron" and "Steel Federation" had created an "iron song" or "Consonance" for the visitors of the exhibition. It was sure to be a new song for everyone.

The main gallery of the pavilion accommodated around 1000 visitors in a sort of amphitheatre that surrounded a stage. The stage itself could be raised and turned. On the walls and ceiling of the gallery 1300 loudspeakers were arranged, comprising 12 sound systems.

Electronic music was played in the gallery using these speakers to create a unique sound experience, with sound "moving", "spinning", "crossing" and becoming almost alive.
The music was conducted by Toru Takemitsu whose composition "November Steps" was commissioned by the New York Philharmonic.

Many programmes are held there,
- modern music composed by Takemitsu and the Greek musician Iannis Xenakis.
- Traditional Japanese music played by famous artists, many of whom were referred to as "National Human Treasures".
- Modern music by the Japan Philharmonic Orchestra.
- And "national sculpture" performances

In the large main hall of the gallery were presented musical sculptures which were creations of the Frenchman François Baschet and his brother Bernard. The metal/glass/speaker constructions had already attracted attention at the Olympic Games in Mexico.

The sculptors and their assistant, Alain Villeminot, worked for three months in Osaka to create 17 works. Visitors could "play" with the sculptures: hammering the metal rods, running wet fingers along the glass tubes, pulling a bow against a steel plate.

Another display in the pavilion was a large stainless steel pendulum that moved with the action of the earth's gravity.