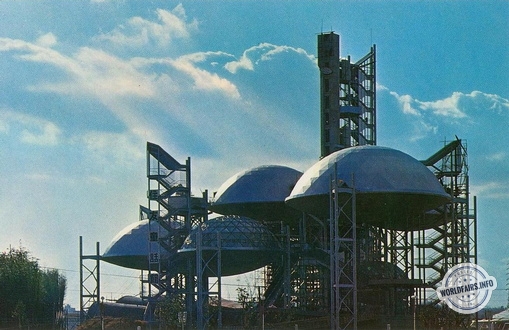 In the western corner of the exhibition site, as if floating in the air, the Sumitomo pavilion looked like a fantasy world

What could be more universal than fairy tales?

"Fairy tales" was the theme that the Sumitomo Group companies chose for their modern pavilion at Expo'70.

If you were with children it was the pavilion of the exhibition not to be missed.

But the pavilion also offered a lot for adults. Here there was a selection of tales and legends from all over the world (including Japan, of course) and a chance to learn a lot about the differences (or similarities) of cultures through these tales.

The pavilion itself consisted of nine "flying saucers", six of which housed an exhibition. Through the transparent saucers you could have a bird's eye view of the exhibition.

On the floor there was a theatre with 250 seats. Here young and old mixed together to bring an old Japanese legend to life.

A film projected on a screen at the back brought to life the Takeda puppet show, which is an institution since the 16th century.

In the saucers, about 15 different tales and legends were told in different ways, all using the new electronic techniques.

There was also an opportunity to "Talk" with the famous characters of the tales of Hans Christian Andersen and Wilhem Karl Grim.

Through the floating and soaring structure of the pavilion, the Sumutomo Group sought to transport visitors to a world of hope, love and beauty.

Aren't fairy tales all of these things?