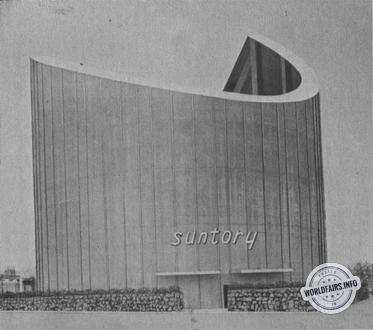 The main ingredient to make a good whisky is good water. In Japan, anywhere you can find water, you can find bamboo.

So it was natural that the Suntory pavilion looked like a bamboo stalk cut at an angle... and the theme of the exhibition was "The Water of Life".

The relationship between man and water was presented in different aspects throughout the pavilion, but the most dramatic presentation was a film shown in a 4-storey cinema on a 6-section screen.

The film showed water as an integral part of nature, as a friend (and adversary) of man. And it showed the festivals around the world that man uses to give thanks for the harvest made possible by water.

Japanese festivals were well represented in the film, including the "Awa-odori" dance of Shikoku, the snow festival of Hokkaido and the devil's drum festival of Sado Island.

The audience was literally surrounded by the film with projections above, below and in front of them at the same time.

In addition to the film, there was a three-dimensional display on the front of the pavilion. "Mikiguchi" was its name, and it was inspired by the bamboo ornament that was used many times in ancient Japan on certain occasions.

In the basement was a special attraction in a small stream that meandered. The stream was made more impressive by light effects. In ancient times, poets played a water game, writing the first half of a poem and leaving it floating on the stream for a friend to complete. This old custom inspired the Suntory stream.