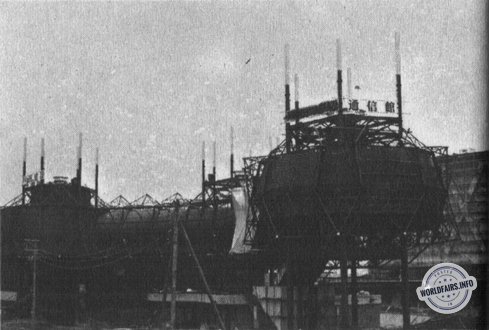 In this pavilion, visitors could not only learn a lot about communications but also had the chance to communicate with people from all over the world.

The communication started already when the visitor was waiting to visit the pavilion. At the entrance, under the yellow sculpture that looked like a tent held up by steel cables, the latest world news was broadcast. Then escalators took the visitor into the pavilion.

The beginning of human communication is the sounds and cries of babies... and on the screens in the first section visitors could see babies from all over the world starting to communicate. It was a chance to talk to people from different countries as they appeared on the screens.

Then the visitor went to a triangular Eidophor gallery with each side 40 metres long. An Eidophor is three sides each consisting of a large television screen. The images shown on the screens were live images of Tokyo, Kyoto and a part of southern Japan, the island of Tanegashima. These live images were shown for the duration of the exhibition, 183 days.

In the general exhibition gallery, the telecommunications industry presented a wide range of new ideas. Videophones for international use. The "Music" composed by a switchboard operator. The world's first screen telephone with a wide range of colours and clarity was presented.

"Man and Communication" was the theme of the third part of the pavilion.