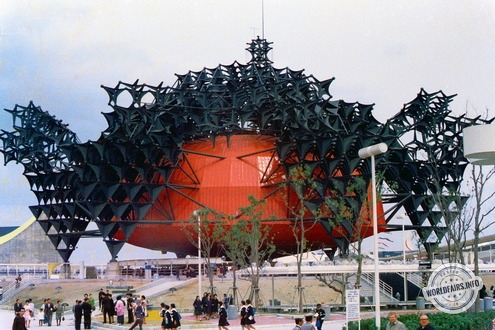 The result was to symbolise a "forest of the future". The exterior was composed of 1500 metal tetrahedrons welded together to form a striking structure. Suspended from this structure was the Global Vision Theater with 500 seats. Next to it was a tower, also made of tetrahedrons, which was illuminated at night for a spectacular effect.

"Light for Man" was the theme of the pavilion. The sponsors explained that the pavilion was dedicated to the hope that man has for the future and that "light" means intelligence and technical achievement.

A spacious reception hall welcomed visitors waiting to see the main exhibition. The waiting hall was air-conditioned and background music was played continuously.

To reach the Global Vision Theater, visitors boarded a rotating platform. The platform could accommodate 500 people at a time. The platform then climbed up and into the 360 degree theatre.... And so everyone could enjoy the presentation, the platform rotated from time to time.

The twenty-minute film was a documentary about young people from all over the world whose common task is to build the future of humanity. The film teams travelled the world to produce the film.

At the end of the film, the platform came down. Visitors were led to a 'park' underground via entrances below the platform. The basement was called the "Place of Water and Light". Sound and light effects highlighted the displays and passages to the "Plaza".