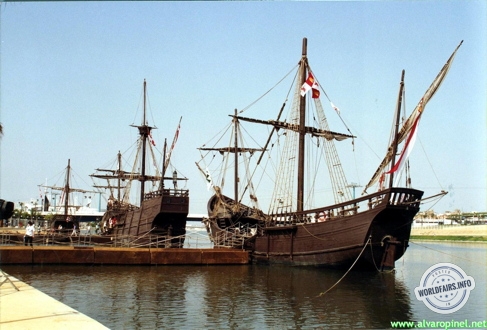 The visitor was touched by history when he arrived at this place. The old Port of the Indies, the hinge on which the direction of navigation turned in the 16th century and which allowed trade to move from the East to the West, was evoked in this stretch of the Guadalquivir.

And it was in these waters that the replicas of the historical ships were anchored: the nao Santa Maria, the caravels Pinta and Ninã, and the nao Victoria.

The first three embarked on the epic adventure of discovery from the port of Palos de la Frontera (Huelva), a reference that was an invitation to visit the nearby city and the nearby Rabida monastery. Here the visitor was reminded of Christopher Columbus, the two Pinzons, De la Cosa, the whole enterprise, under the patronage of the Catholic Monarchs, one of the events that would change the consciousness of humanity about itself and our planet.

The nao Victoria, the first ship to travel the globe from 1519 to 1522 under the command of Juan Sebastian Elcano in an experiment led until his death by Ferdinand Magellan, left the port of Seville, which was located very close, downstream, to this evocation of the Port of the Indies. The Victoria ship could not only be contemplated from the water's edge, but those who wished to visit it could do so.

The reconstruction of the four ships was done with the strictest fidelity. This required painstaking archaeological and historical research. Whenever possible, the same materials were used as in the originals: oak for the keel, stern, bow and the frames; pine for the masts and yards: wood carefully selected from Galician and Pyrenean woods and cut at the right time for caulking. The rigging was made of hemp.

Thanks to the technology that these ships required, the geographical knowledge of the time, the trade winds, the daring of these protagonists and the support of the state, the discoveries were possible. These ships had already travelled 15,000 miles: 12,600 of them under sail. They had dropped anchor in more than 30 ports and had been visited, before the inauguration of Expo'92, by more than three million visitors. Since August 3, 1990, they have called at ports along the Spanish, Portuguese, Italian and French coasts. On October 12, 1991 these replicas left Palos de la Frontera to cross the Atlantic after stopping in the Canary Islands. In America they went to Puerto Rico, the Dominican Republic, the Virgin Islands and the United States ....

The image of this port was the composition of an ideal place to enter the pavilion of the Navigation and thus begin the route of the Way of the Discoveries.