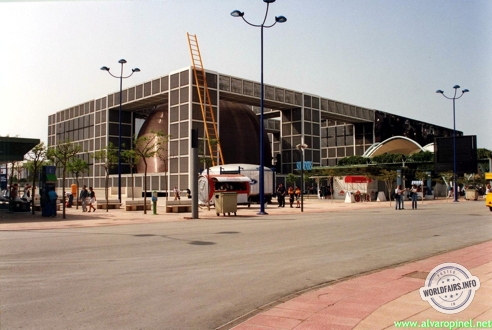 The Alcatel cinema was different from other cinemas because of its futurism and because it literally immersed the viewer in its images. This effect was created by the semi-spherical shape of the screen - 24 metres in diameter - and by the inclination of the seats.

The film Eureka, The Passion of Knowing, a production financed by Alcatel in an exclusive Expo'92 project, was shown.

This film summarised five centuries of discoveries. In the space of 15 minutes, the most representative scenes of the human adventure of discovery of the last five centuries were reconstructed. This synthesis could only convey the sensation of a moment, through people, a place and an action: that of discovery.

The first circumnavigation of the globe, that of Magellan and Elcano; Newton's studies on the material nature of light; Leeuwenhoek's discovery of the microscope as a key element of science; the discovery of the paintings in the Altamira Caves... These were some of the great feats reconstructed in this film.