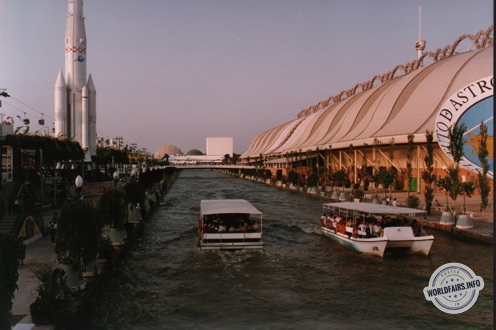 It was one of the four pavilions in the Future Square. It introduced us to the sophisticated network that allows us to talk about the planet as a big global village, and showed us its repercussions in individual and collective life.

On the other hand, this exhibition showed the desire for greater citizen participation. It showed, throughout its course, the distance between the present reality and the possibilities of the future. The simple explanations in the Telecommunications pavilion made the exhibition very attractive and accessible to the general public.

The visit to the pavilion began with a videowall consisting of 848 screens: a huge map of the world. In this audiovisual game, one could see the process of telecommunications that made it possible to go beyond borders, time and distance. The communications of our time are defined by their immediacy and by the awareness of totality, and the elements on display followed this line of thought.

The assembly of this sample of the main communication centres in Europe was carried out by Telefonica de Espana, in collaboration with Belgacom, British Telecom, France Telecom, PTT Telecom, Stet and Telekom.

The state-of-the-art equipment on display showed the visitor the technological perspectives of this sector. The post-industrial era at the end of the century had rarely been so well presented. As a reference to the immediate application of the new means, we can mention the large fibre optic network, a sample of the future, which was installed at Expo'92