Pavilion of the Universe - Expo Sevilla 1992 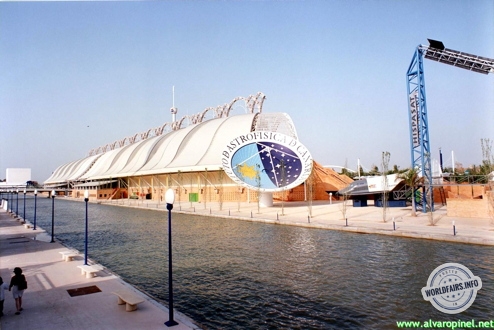 The Universe pavilion offered unusual experiences. Enter the cosmic adventure of an interstellar journey, receive a bath of particles from the farthest reaches of the cosmos, or check the extreme lightness of aerogel, the lightest solid material in the world. The pavilion offered a spectacular exhibition that revealed the secrets of life and matter.

Under the title The Universe: from infinity to infinity, the pavilion offered a fascinating journey through the geography of the cosmos and its history, from the infinitely small to the infinitely large, through holographs, lasers, multivisions, real objects, productions, etc.

In a first selection, the most conspicuous structures representing the universe were shown. Then we saw the instruments available to current science for the study of these structures.

Then there was the spectacular Digital Planetarium, which was unique in the world: directed by a computer, its images were controlled by a graphic processor and then projected onto an 18-metre dome. It offered an impressive 12-minute show, entitled The Cosmic Adventure, which plunged the spectator into the secrets of the Universe.

Finally, a large multivision, The Evolution Mural, showed a historical review of the events of the Universe as we know them today.