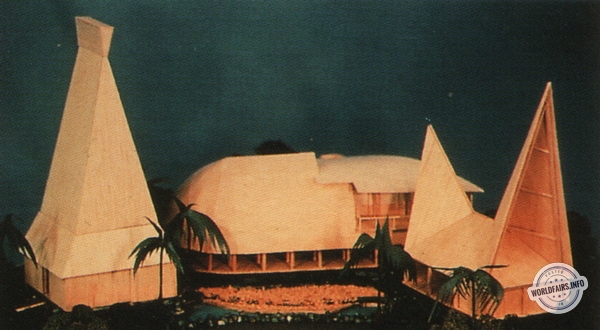 The South Pacific, with its bewitching sun-kissed islands, warm and hospitable people and picturesque history, rich in ancient and mysterious customs, confuses the mind and excites the imagination. With the advent of modern air travel, the South Pacific is no longer so far away. There are a multitude of captivating and varied attractions to be explored far and wide across this vast expanse of azure ocean, some twenty-one million square kilometres in size. It is a place where contemporary lifestyles blend with traditional culture and values: a place where modern industries have been established, and where people still eat their evening meals in their canoes! Arts and crafts are made as they were centuries ago: houses are still built with cool palm roofs, and the sense of community life is still very strong.

The pavilion had the appearance of three islands. The largest of these has a circular lake and an open-air stage for live performances.
Visitors could also see a hut on this island that symbolised the present and future of these countries. The other two islands, called "Bure Kalou" and "Fale" respectively, had traditional huts that represented the past. The water and vegetation were beautifully blended to evoke the typical atmosphere and climate of this part of the world.