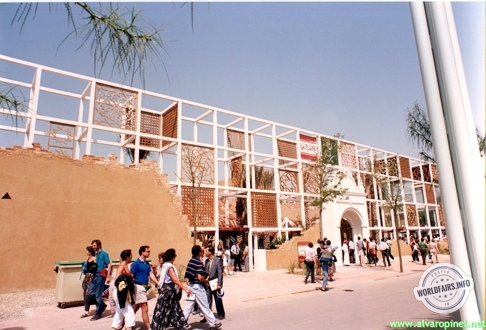 Visitors to the Saudi Arabian pavilion were invited - and challenged - to discover a country in a process of self-discovery.

The objectives that would guide the visitors during their visit were threefold.

First, Saudi Arabia is a country rich in history and archaeology, both pre-Islamic. It is the country where Islam was revealed to the Prophet Mohammed. It is proud to be the Custodian of the Holy Cities of Islam, and host to the annual Pilgrimage to Mecca.

Secondly, the diversity of its environment is truly amazing - from its famous sandy deserts to its green mountain ranges and cosmopolitan coastlines.

And finally, Saudi society was undergoing one of the most rapid transformations in human history - and yet it was seeking to preserve the Islamic values that are its foundation. As for the future, technology and the sensible use of resources will be harnessed for the welfare of the people and their quality of life.

The mud brick walls at the front of the pavilion were pierced by a steel gate, embodying the tradition and modernity of the new Saudi Arabia. Through a traditional gate, the visitor entered a space cooled by a water curtain, which represented a typical agricultural well in an oasis setting. Next, they entered the mysterious pre-Islamic corridor, which evoked ancient Arabia with antiquities, rock art, pre-Arabic inscriptions and dramatic lighting.

The central space, occupied by a tent, was a dramatic evocation of the Kingdom's traditional ways of life. Lighting effects dramatised a Bedouin tent in the middle of a sandy desert. The exhibition gave an insight into the cultural and geographical diversity of the Bedouin people, with a display of handicrafts from all regions. The links between Saudi Arabia and Spain were presented, both for the past and for the future.

Another exhibition room focused specifically on Islam, the Pilgrimage to Mecca, and its meaning for Muslims around the world. The final space gave the visitor a vision of the future of Saudi Arabia; a country where oil resources and revenues are used prudently to maximise their potential, green the Kingdom and improve the quality of life for all its citizens.