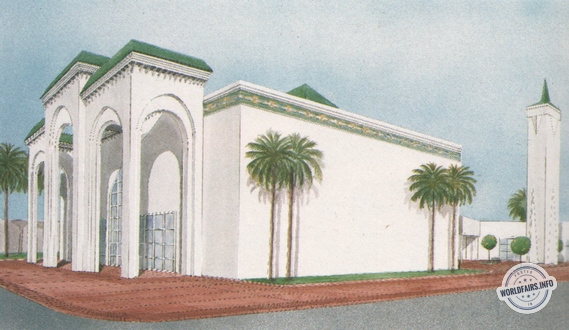 Algeria entered history with the Berber kingdoms, the natives who called themselves "Amazigh", i.e. "free men", and then the Phoenicians, Romans, Vandals and Byzantines, until the arrival of the Arabs, bearers of a new spirituality and unifying ideals that cemented society and forged a national identity that the long colonial night did not manage to alter.

Expo'92, which was held in Andalusia, the high point of a common secular history, was an opportunity to present an Algeria that was strong in its identity, open to the fertile contributions of other cultures and resolutely committed to the modern era.

In its pavilion, it invited the visitor to a reading of history, illustrated by rock engravings, dolmens, Berber mausoleums, Roman cities, monuments of Islamic art, and by several collections of museum pieces, including coins from various periods.

One could also discover authentic traditional urban art and rural crafts; from the carpets, the visitor will retain in particular the warmth of the colours and the harmony of the geometrical designs; on the pottery, he will be initiated into the symbolism of the motifs.

The contemporary plastic arts were represented by the famous miniatures of Racim which told the epic of old Algiers and by the most prestigious paintings of Issiakhen, Khadda, Mesli and Martinez.

A wing of the pavilion was devoted to modern Algeria, which was working to promote its economic and social development.

We should mention the restaurant where, in a typically Algerian setting, the visitor could enjoy a completely original culinary art, and finally note that Algeria presented Andalusian music ensembles, ballets and amazing folklore groups.