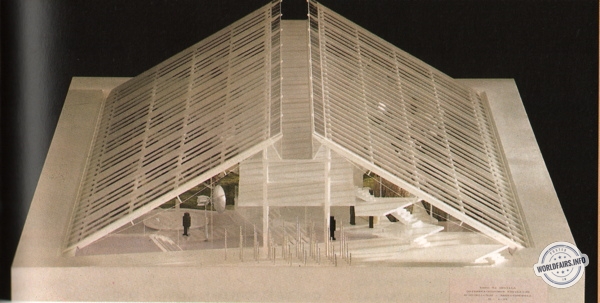 Three worlds in perfect harmony - culture, art and technology - awaited you in the Austrian pavilion. The visitor's journey of discovery began with the historical roots of the Alpine republic, which are closely related to those of the host country, and continued through the present to the Europe of the future.

Austria presented itself as a modern, dynamic and creative country, aware of being a vital impetus for Europe.

Amongst other things, the world of sound, the beauty of a winter resort and a world in which technology was the main actor could be discovered. Although the visitor moved around in an air-conditioned atmosphere, thanks to the transparent roof, he felt as if he were in the open air.

If you came to the pavilion in the country of Wolfgang Amadeus Mozart with the intense desire to enjoy a musical performance of the highest quality, you were not disappointed.

In the Austrian restaurant on Avenue 3, the most exquisite dishes were served, ranging from the traditional specialities of Vienna's cafés to the new Austrian cuisine.