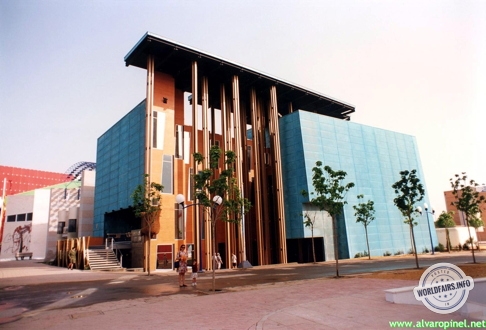 Catalonia is a land of distinction, which, due to its geographical location and history, has received the most diverse cultural influences, and has created and disseminated both new techniques and new cultural forms. Over the centuries, it has created its own culture, from which have sprung figures of truly universal prestige, especially in the field of music and the plastic arts. This is the essential element that inspired the contents of the pavilion of Catalonia, based on two principles that have been maintained throughout the centuries: tradition and modernity.

The Romanesque and Gothic styles were represented by works of religious art representative of these periods.

The music of this period was represented by one of the most prestigious ensembles: the Royal Chapel of Catalonia.

Another essential moment in Catalan culture was Modernisme, with world-renowned figures such as Gaudi and Domènech i Montaner.

The revaluation of medieval art into a synthesis of tradition and modernity, together with the rebirth of the Catalan language and governmental institutions during this century, was one of the most original contributions of the pavilion.

The artistic avant-garde of the 20th century is explained by the contributions of great artists such as the architect Josep Sert, the painters Miro, Dali and Tapies, or the musicians Pau Casals and Robert Gerhard.

Music, art and gastronomy create links between peoples and individuals, and the Pavilion of Catalonia aimed to make the cultural reality of Catalonia known to all visitors, as a testimony of cordial coexistence.