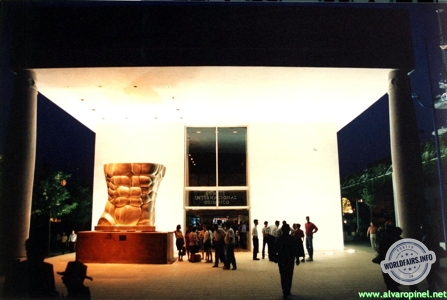 For the first time in its history, the International Olympic Committee was present at a world exhibition, on the occasion of Expo'92 in Seville and the Olympic Games in Barcelona. The main objective of the pavilion was to publicise the aims of the Olympic movement and to establish a link between sport and culture, developing the physical, moral and spiritual qualities of humanity.

The design of the building was inspired by a Greek temple, where classical forms and avant-garde structures were harmoniously combined.

The building was rectangular in plan and consisted of an entrance atrium, a vestibule and, in the extension, the exhibition hall.

At the entrance stood a three-metre-high Olympic torso by the Andalusian sculptor Berrocal. The sculpture consisted of six vertical elements supported on a base with an internal mechanism that allowed it to move. The work was created especially for the exhibition of the International Olympic Committee pavilion in Seville and was placed in the sculpture park of the Olympic Museum in Lausanne after the exhibition.

Inside, there were exhibitions relating to Lausanne, the headquarters of the International Olympic Committee, the Olympic Games of Barcelona '92 and future headquarters: Lille-Hammer '94, Atlanta '96 and Nagano '98.

Finally, in the pavilion's gardens, the cauldron where the Olympic flame burns was placed.

The building, of a permanent nature, was preserved as a symbol of the cooperation between the International Olympic Committee and the city of Seville, and was taken over by the company Sodian in 1993, in order to be integrated into the Cartuja'93 project.