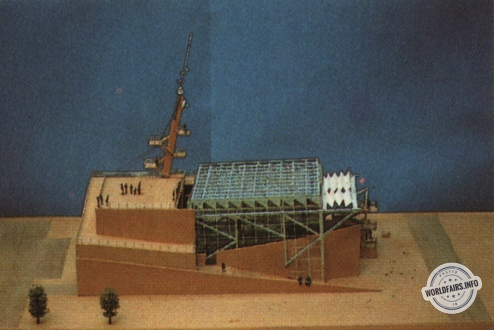 The pavilion of the International Red Cross and Red Crescent Movement is a permanent building. It was located on Avenue 5 and inside the International Zone. Its message was conveyed through its architectural form and its contents.

Its form was similar to that of a transmuted ship, having survived the storm thanks to the solidarity between men, encouraged day after day by the dynamic spirit of the Red Cross and Red Crescent.

The content programme mainly showed the activities of the Red Cross and Red Crescent in the face of natural disasters and warlike conflicts, and their contribution to the promotion of peace in the world. In addition, our intention was to make visitors interested in our organization and want to get involved.

The Red Cross and Red Crescent had a programme of young National Society volunteers from many foreign countries, Spain and Seville. The requirements were to have a first aid certificate, to speak English and/or Spanish, and they were mainly involved in public relations within the pavilion, receiving visitors and accompanying them around the Expo'92 compound and the city to attract the public to the pavilion.

The Red Cross and Red Crescent welcomed with extraordinary interest the idea of participating in the Seville 1992 World Exposition, a celebration of a global nature.

The theme of the Exhibition, the "Era of Discoveries" and its aim to understand man through his achievements in order to better face the future: all of this is very relevant to our Organization, which can offer more extensive and serious information about its humanitarian actions since its creation. We also wanted to emphasise that you have great confidence in our pavilion, which was visited by most of the twenty million visitors who came to Expo'92.