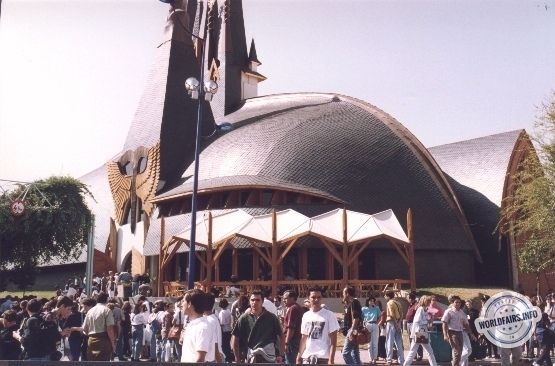 While in Spain, at the end of the Middle Ages, preparations were being made for the discovery of the 'Indies', the Ottoman Empire was advancing towards the West. In 1456, in Nadorfehervar, now Belgrade, the Sultan's army faced the Hungarian army, whose leader, Janos Hunyadi, defeated the Trucs.

In memory of this victory, the Pope had the bells rung at noon in all the churches of Europe.

In 1458, Hunyadi's son Matias was elected King of Hungary, making his country a strong and independent power and an important cultural centre of the Renaissance.

Inside the pavilion, a double wall represented the resistance to Turkish expansion, the defence of Western Europe. The wall divided the pavilion into two parts: the eastern and the western part, whose decorations symbolised the country's relations with the East and the West. In addition, there were seven beautiful towers with forty bells ringing to remind the world of our heroic deeds throughout history.