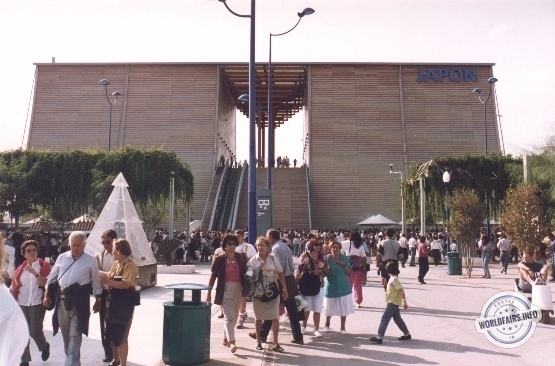 The Japan Pavilion had a frontage of 60 metres and was 40 metres deep. Its highest point was 25 metres and it was one of the tallest buildings ever constructed of wood. It had four floors, including the ground floor, and was supported by laminated wooden columns and beams. The ceiling was a steel rib covered with a semi-transparent Teflon fabric. The outer door was covered by arched pieces of laminated wood.

Visitors to the pavilion began their visit on the upper floor, crossing an arch bridge (Taiko-bashi).

The exhibition rooms contained countless interesting objects. The biggest attraction was the life-size reproduction of the sixth and seventh floors of Azuchi Castle (16th century). The sixth floor, painted red, was octagonal in shape and the seventh floor, decorated in black, was square, with sliding doors made of typical Japanese paper and decorated with golden prints.

Visitors could enjoy the atmosphere of Japan through the art of Origami (papyroflex), traditional Japanese arts and various manifestations of science. Another attraction of this pavilion was the Gyratory Theatre, divided into five areas where you could see films of great interest, mixing real images, animation, and computer graphics. Sasuke, a legendary Ninja hero, along with Don Quixote and Sancho Pansa, showed you the present and future of Japan.