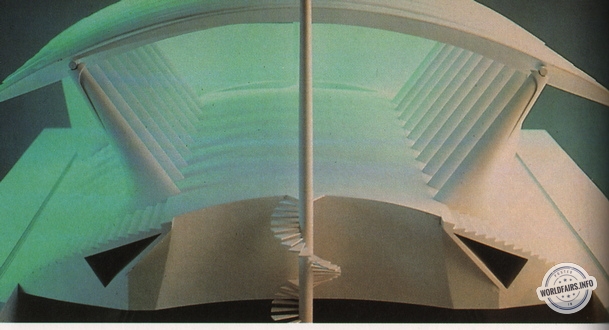 Like its neighbours, Kuwait, located in the northwestern part of the Persian Gulf, is rich in oil deposits which form the basis of its economy. The state of Kuwait as such became fully independent in 1961, but the country's history goes back thousands of years. This is evidenced by archaeological finds on Faylakah Island in Kuwait Bay, which have revealed that the country belonged to an ancient civilisation contemporary with Sumer and the Indus Valley.

The Kuwait pavilion at Expo'92 consisted of a multi-storey rectangular building surrounded by two ponds. Its three main parts - an exhibition hall, a platform and a movable roof - depended on each other on three different levels along the path the visitor took through the pavilion. The underlying idea was to create a pleasant meeting place from which to contemplate the country's future.