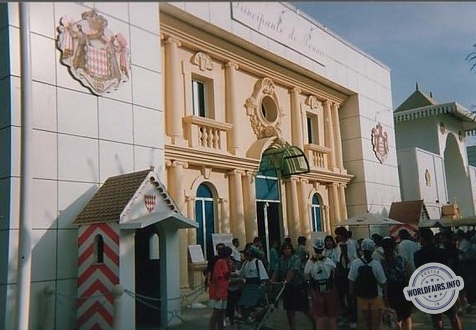 As the country of choice for oceanography, of which Prince Albert I of Monaco was the founder, the Principality had chosen to devote most of its pavilion to the theme of the sea. The visit opened on a hall where the astonishing Monegasque car "la Centenaire", mannequins in opera costumes and a panoramic video projection of Monaco and the world-famous events taking place there were presented.

A ship's gangway, overlooking a giant aquarium, gave the visitor the impression of being on board a yacht arriving in the principality.

The aquarium, crossed by a 14-metre long transparent tunnel, allowed visitors to admire the fauna and flora of the Mediterranean and to follow the progress of the divers.

The visit ended with a visit to the famous Café de Paris, an evocation of the Monegasque way of life.