Nature Pavilion and Garden of the Americas - 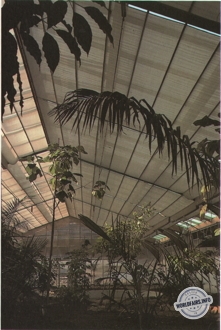 The Nature Pavilion and the Garden of the Americas were a contribution to the growing awareness of the natural environment, especially in the Americas.

The Nature Pavilion presented to the visitor the natural systems of Latin America, their importance at a global level, and the problem of their preservation, from a current perspective and on a scientific basis

The first room, dedicated to the Amazonian forest, was a large greenhouse where an Amazonian rainforest was staged, with a complement of the most important details of life in the jungle. The Latin American nature room presented the variety of American natural environments. The visitor, on a transparent platform, can observe a large model of the physical geography of Latin America. On the sides, a large number of screens showed a series of images of the region's ecosystems.

On the first floor, Nature to Discover was an audiovisual room where a 20-minute, 70mm silent film was projected in the Showscan system, showing footage from the Old World and the New World. The Preserve Nature room on the ground floor carried a message about the need to conserve and preserve Nature. Man was the primary destroyer, and development and preservation of nature must be compatible. Finally, the expeditions of the Spanish Naturalists to America were presented, as well as the work of the different non-governmental organisations that work for the preservation of Nature.

The Garden of the Americas was a tribute to the products from America that have profoundly transformed the way of life in this part of the Atlantic. It included a greenhouse and a shade area that allowed plants from a wide range of environments to be grown, in some cases with a heating system and in others with light filtration systems. The 400 varieties of shrubs, trees, climbers, palms, herbs and cacti were grown under the Racine programme of cooperation with American countries. In addition to these species, there were agricultural products such as corn, squash, potatoes, tomatoes and tobacco, which were known thanks to the Discoveries and which arrived in Europe via Seville.