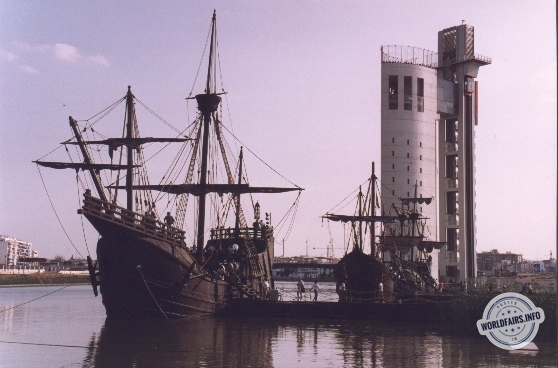 The architecture and the anchoring of the pavilion on the river bank already announced the subject: navigation, the progress of maritime discoveries from the end of the 15th century to the present day, and the consequences that this singular adventure has had for humanity.

The very mention of the word "sea" conjures up images of adventure, elegant sailing ships, pirates and wars, brave sailors and intrepid captains. Navigation has been the fundamental instrument of a collective discovery, a heritage of all, which is due to a multitude of men and many efforts, mostly anonymous, and was the central objective of the exhibition. Recognising the land as well as the sea and navigation, the whole of humanity has succeeded in having a complete picture of the planet on which it lives, connecting its most distant points, and converting it into a single, inter-communicated and interdependent world: a common home for all. The exhibition first presented what was known about navigation before 1492: a maritime environment close to the seaside towns; coastal shipping, which made it possible to travel long routes without going too far from the coast; some long voyages of daring navigators (Polynesians, Vikings...) who reached distant lands without developing or establishing stable relations with their regions of origin.

The central core of the exhibition presented the path from the first firm steps towards a complete vision of the earth in the 15th century, to the end of the 18th century, when remarkable discoveries in science and technology allowed the last limits of the planet to be fixed, and to present an almost complete and very precise vision of its outline. At the beginning of this long and decisive period in the history of humanity, the Iberian Peninsula played a transcendental role.

The slow process of relationship and economic, social and cultural integration, which had begun towards the end of the 15th century and the first half of the 16th century, accelerated at a dizzying pace when the technology and machinery of the industrial revolution became dedicated to navigation in the early years of the 19th century. The last part of the exhibition described how the routes of navigation, from the first uses of the steam engine to the propulsion of ships, became more regular, faster and able to carry more people. This has made it possible to transport ideas, people and goods and to contribute to the inevitability of human groups interrelating.

Adventure, science, technology, the struggle for hegemony, communication, the mass transport of people and goods, interdependence.... This is the contribution of navigation to the Age of Discovery.