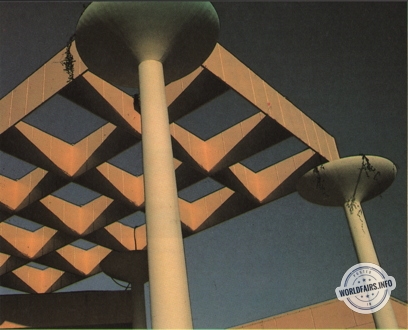 The Arab pavilion, located between the Moroccan and Caribbean pavilions, was a 2420 m2 building.
Its roof windows were made of a highly refractory glass that filters the outside light.

The entrance portico consisted of pergolas that rested on columns crowned by large chalice-shaped planters. The sense of dignity is reflected in the building's most expressive meeting point, which included Egypt, Jordan, Syria and the League of Arab States: Morocco, Algeria, Tunisia, Libya, Egypt, Mauritania, Oman, Qatar, Syria, Somalia, Sudan, Yemen, Saudi Arabia, Barhein, the United Arab Emirates, Iraq, Djibouti, Kuwait and Lebanon. Some of these countries also had their own pavilions.

The exhibition space was spread out along an inner street.

The access to each sector was marked by a series of lights that rose up in the shape of a pyramid, recalling the origin of each exhibitor.

The contents of the pavilion revolved around traditional and contemporary Arabic music and dance.

The permanent exhibits included archaeological pieces, ceramics and sculpture from the most prestigious collections of Arab museums.

Europe had the privilege of hosting such museum pieces. Some of them date back to the sixth millennium BC.

The pavilion also housed the League of Arab States pavilion, which displayed a series of Arab photographs, manuscripts and maps from before the discovery of the Americas.

In addition, photographs of caravels that were used by the Arabs, navigational and astronomical instruments were displayed.

This pavilion was also the centre for the presentation and dissemination of the many contributions of the Arab civilisation and culture to the Spanish cultural heritage in particular, and thus to the whole of the European continent.