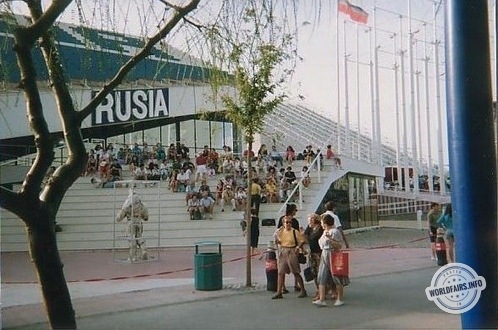 The aim of the Russian pavilion was to make known the contributions in the field of science, technology and culture of the peoples of the Russian Federation to the world civilisation during the five hundred years that have elapsed since the discovery of the New World until today.

The first part focused on topics such as the birth and development of relations between Russia and Spain; the stages of the discovery of Siberia and the north-western coasts of America; the great scientific and geographical discoveries made; the tradition of reindeer herding in the north and the Clash of Cultures.

In the second part, the most important themes were: the 35th anniversary of the beginning of the cosmic era, the first artificial satellite of the Earth, Sputnik, and man's first journey into the Cosmos; the stages of mastering the Cosmos; the preparation of the journey to Mars with the reproduction of a martegator; new technologies and materials, and the impact of the Cosmos on man.

The third part presented the visitor with a study of the human being: physiological and medical research; the physical resources of man (sporting achievements); the most remarkable expressions in the fields of art and culture (Dostoyevsky, Sakharov, Rublev, among others).

The whole exhibition was structured to give the visitor an idea of the indestructible nature of the links between man and nature and the inexhaustible potential of human reason.