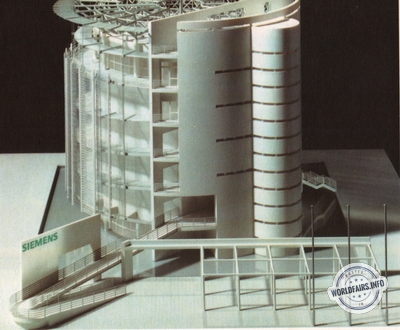 The motto "Evolution in networks" includes two aspects: "evolution" and "intercommunication". In biology, evolution has enabled development from pre-cellular stages to vertebrate human beings. Siemens presented here the technological process in analogy with biological evolution. In the same way as in nature.

By means of a multivision system, we showed how Siemens has promoted the technical development on which its competences are based since its foundation 150 years ago. Our many contributions to technical development in the past show that today's innovations are based on the pioneering work of the past and demonstrate that "innovation has a tradition at Siemens". The most outstanding technological achievements in the fields of Communications, Energy, Home Automation and Industry are on display.

In a second area, we projected a film that showed 'evolution in networks' beyond the technological aspect, revealing to us as a 'concrete utopia' what it would be possible to do nowadays by correctly using all the resources of technology.