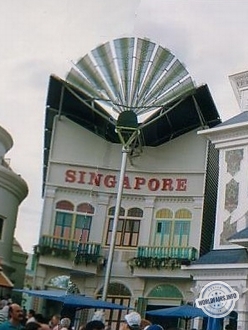 Singapore is a city of contrasts and surprises, offering the best of East and West, old and new. This was reflected in its pavilion, which encapsulated the multicultural heritage and diverse attractions of this tropical Southeast Asian city-state.

The pavilion was located, along with the other eight countries, within the ASEAN Plaza. The façade of its two-storey building characterised the intricate patterns of Singapore's ancient architecture.

Inside, the validity and excitement of Singaporean nightlife was brought to life by ephemeral art demonstrations such as calligraphy and finger painting, as well as by a tempting selection of typical food and souvenirs. Visitors could come and feast on various Chinese, Malay and Indian dishes, even if it was only to sample festive delicacies such as moon cakes and rice dumplings, and to enjoy Singapore's famous 'Sling'.

The upper level of the pavilion featured a thematic display of exhibits that illuminated Singapore's multifaceted charm. The backdrop was the dramatic skyline that depicted a modern and thriving metropolis.