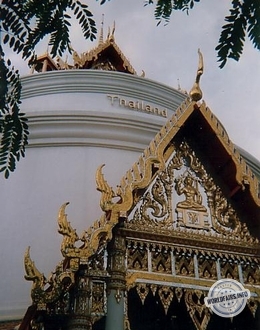 Thailand is located in the heart of Southeast Asia and is surrounded by Malaysia to the south, Burma to the west, Laos to the north and Cambodia to the east. It has a coastline of 2400km.

The capital is Bangkok, the largest city with a population of over seven million. Central Thailand, including Bangkok, is a vast and fertile plain. The north is mountainous. The northeast is semi-arid. The southeast is tropical.

The Thai pavilion was a spherical, four-storey building of 900m2. The ground floor illustrated Thailand's trading history, displaying an ancient sailing ship, laid on the sand and decorated with goods dating back a few hundred years.