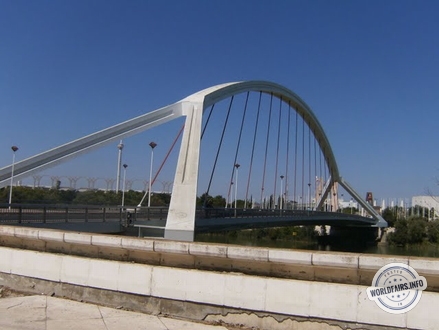 Also known as the Barqueta Gate, this single-span bridge, which links the two banks of the Gaudalquivir, has its deck suspended from an upper arch.
Built entirely of steel, it has a span of 168 metres and is 30 metres wide. It rests entirely on four concrete piers, which gives it an illusion of lightness.
The arch of the bridge consists of a 120-metre generator and at its ends two inclined forks that rest directly on the four concrete piers.
These are connected by two transverse beams which, while holding the support bases in place, ensure the support of the ends of the deck.
From the base of the piers, the oblique tie rods transmit the thrust forces to the arch.

The 21-metre wide deck, composed of a box and an othotropic slab, carries a double track and its pavements.
The deck is held in place by steel cables that are attached to the lower part of the arch. The red cables contrast with the white colour of the bridge, revealing the contrasts in form and allowing the shapes of the building to be seen.