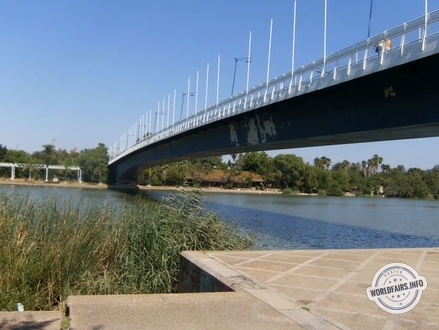 The orthotropic framework of the bridge was dictated by the constraints imposed by the specifications, which specified to the designers: the width of the canal (165 metres), a relatively low height and, above all, the prohibition of raising the level of the roadway in order to minimise the visual impact and therefore to alter the view of the Cartuja.

This bridge is in fact a 170-metre long steel box with a very low curvature, which gives it its slenderness.

The total length of the building is 238 metres.

The deck consists of 22 precisely welded segments, which took only nine months to assemble.

The bridge was built on one side of the riverbank, parallel to the riverbank, and then pivoted to span the Guadalquivir River with a double float capable of supporting a 600 ton load.

This bridge was the first to be completed for Expo'92.