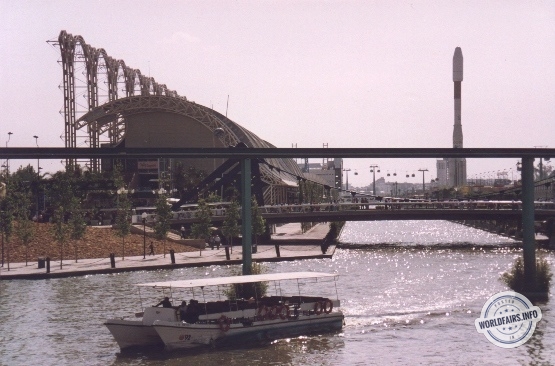 The Path of Discovery led to the Square of the Future: four pavilions that projected key themes into the future: the Environment, Energy, Telecommunications, and the Universe.

The building itself was an expression of technology at the service of symbolic elements: from the city, one could already contemplate its portico with pink granite arches supported by pillars, which rose to a height of 36 metres.

Of these four pavilions, the one corresponding to the Universe was organised by Expo'92 S.A. The Environment pavilion was designed by the Instituto Nacional de Industria, the Energy pavilion was put together by some fifty companies in the sector and finally, Telecommunications was designed by Telefonica de Espana S.A.

These four exhibitions were independent of each other, both in their space (each had its own entrance) and in their presentation. However, they all had the same objective: to describe the current situation and perspectives of scientific and technological discoveries, the social problems facing science, and to present scenes from the future.

These exhibitions were based on social concern and solidarity. All the instruments and experiments immersed the visitor in an imaginary realm, which was not pure fiction.