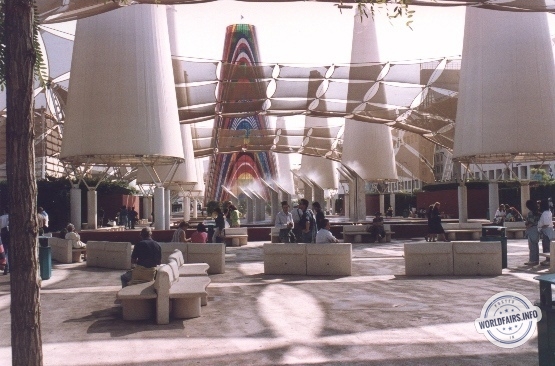 This avenue, which consisted of a garden, twelve canvas towers and an umbrella roof, was above all the avenue where the twelve pavilions of the European Economic Community stood side by side, offering an image of peace and culture to the visitors to Expo'92.

The Garden of Europe was conceived as a river, with four squares along the way, distinguished by their different colours. The blue square had sculptures dedicated to the wind, the yellow square was characterised by the "Washingtonia" palms, the green square by the "Phoenix" palms, and finally the white square by a square of orange trees with bleached trunks, arranged around a white marble basin.
Finally, the garden was surrounded by a curtain of cypress trees.

The twelve white canvas towers, 30 metres high, paid homage to the monastery of La Cartuja with its brick chimneys.

Finally, the umbrella roof, which consisted of a multitude of canvas squares linked together by tensioned cables, protected visitors from the sun and symbolised the link between the twelve states of the EEC.