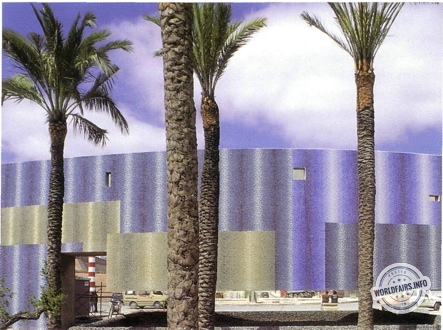 The Water Gardens / Vitalis Park are one of the structural elements of the EXPO '98 site. Together with the Central Alley of the site and the Tagus River, they form the core of the site.

To the west, they are surrounded by three important buildings of the site: the Ocean Pavilion, the Virtual Reality Pavilion and the Camoes Theatre / Jules Verne Auditorium.

The Gardens, which run from west to east, have a common identity due to their overall layout and the works of the painter Fernando Fragateiro. The theme of water is dealt with in several ways: biological, sensory, playful, artistic, scientific, etc.

The entrance is via the Central Alley, through a large arched wall, 7 metres high and 2 metres wide, which overlooks a small pool. It symbolically represents a water tower, the source of the entire water transport system.

From west to east, the first garden is the Palm Garden. The ground has been lowered by about 80 centimetres, in order to accentuate the effect of a sequence that runs from the Press Centre in the west to the Camoes Theatre / Jules Verne Auditorium in the east. They establish a "valley" gradient between the two neighbouring ensembles, the Press Centre and the Pavilion of the Knowledge of the Seas. The central element is a canal through which water from the water tower flows to the river. The opposite effect has been created in the next garden, the Mediterranean Orchard, where the ground has been raised to provide a good view of the garden next door, the Diagonal Garden, the Dock and Lake Ulysses to the east.

Lake Ulysses - the "wet" place - is the third of these water gardens. Idealised after the adventurous experiences of Ulysses, the hero of the Odyssey and mythical founder of Lisbon, it was created with the safety of adults and children's play in mind. To this end, the lake has an irregular bottom that allows you to cross it without getting your feet wet, as if it were a ford. For about two minutes, a special effect is created, where the lake fills up, empties and reappears as a 2-metre high curtain.

Opposite is the "Cascade" building, a 4-metre high portico from which 103 small tubes project water 4 metres away, forming a sheet of water up to the wooden bridge that allows you to cross laterally between Lake Ulysses and the island lake. The island lake is surrounded laterally by walls covered with painted azulejos, allowing views of the river through the Cascade. In the middle of the "still" water is the island which creates the atmosphere of an exotic landscape on the edge of an imaginary coast. As if born from this lake, the "hydraulic garden", is a delta of the river that serves the Tagus. Under the various canals, made of pebbles, which form the delta, is one of the wooden platforms, where a set of games and water machines are installed. These games use the water of the canals to pedagogically demonstrate the ideas that come out of the experiments carried out in the physics or technical laboratories applied to everyday life. They are presented as entertainment for children and will make them ask their parents embarrassing questions.