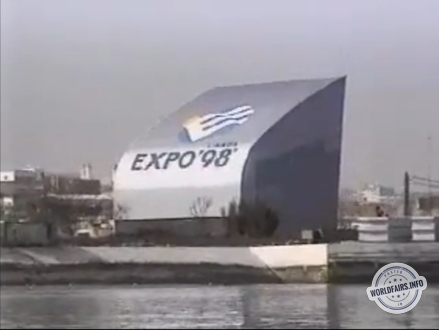 Designed to welcome visitors and provide detailed information not only about EXPO '98, but also about the whole area under renovation, the Information Centre is a large curved structure rising from the ground with several floors overlooking the future district of Lisbon.

The supporting structure for the roof, originally designed for an exhibition on the 1865 International Exhibition in Porto, was inaugurated in the Soares dos Reis Museum in June 1994, and was designed by the same architect. A link is thus created between the two major international exhibitions held in Portugal since the first such event in London in 1851.

The supporting structure is composed of curves, triangular beams supported by joints that allow it to be raised or lowered. In Porto the roof was transparent, reminiscent of the Crystal Palace which was built especially for the 1851 exhibition and later destroyed by fire. In Lisbon, the metal cladding covering the Information Centre reminds visitors of the ephemeral nature of the building. In both cases, the geometry of the curve was planned to distribute the forces acting on it as evenly as possible.

History and technology are thus combined in this building, which will disappear in the future or lend its supporting structure to another architectural creation.