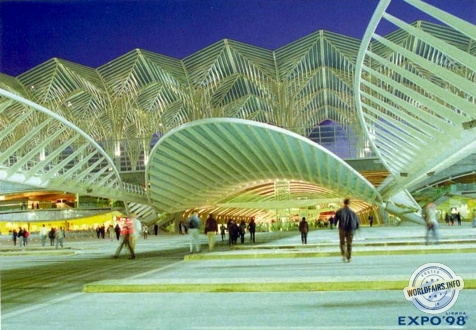 Santiago Calatrava, the architect of the Oriente station, decided to organise the whole structure around two axes: one is obviously the railway line, the other axis is a symmetrical line that runs from the river, passes between the Pavilion of Utopia and the Dock Olivais, crosses the centre of the entrance to the Sun, and ends on the other side of the railway line. This second axis is clearly a means of ensuring formal continuity between the new district and the surrounding urban fabric, which is accompanied by the uninterrupted passage of the two tracks through the station and a subway, which are perpendicular to the river and thus establish a spatial relationship between the two parts of the city.

The station is an imposing urban structure that includes a railway station, a bus station and an underground station.

The architect designed the station, which is a transit station and not a terminal station like Santa Apolonia, as a covered bridge over the platforms, which merely perform their functions.

The bridge is a concrete slab supported by intersecting arches before reaching the ground. Standing on this slab, the roof of the pier is shaped like a tree; each metal element consists of a "trunk" that opens into "branches" between two sheets of glass supported by parallel beams. Tree-like proportions were adopted,
and leads to the existence of very high "tree tops".

This reference to nature shows that Santiago Calatrava continues to follow his expressive research based on the work of Antoni Gaudi.

Below the bridge, a pedestrian subway follows the longitudinal axis of symmetry, starting from the side closest to the river - with a large porch made of glass and metal - and extending through the bus depot - the roof uses the same materials as the porch and extends perpendicularly to the axis of symmetry, thus protecting the passengers entering and leaving the building.

This station consists of:
- Bus station and car park: Two glass and steel canopies, alluding to the wave near the sea, protect the two 112 m long and 11 m wide platforms. The canopies meet at the longitudinal gallery which ends at the station.
- The bus service area is at the end of the platforms. Two levels of parking, with a capacity of 2,000 cars, are located under the station.
- Metro station: The metro station runs transversely through the building. It is connected to the longitudinal gallery by an intermediate floor which serves as the main hall and where the station's ticket offices are located.
- Railway Station: The eight railway lines cross the building at the bridge level covered by a tree-like structure made of iron and glass.78m wide and 238m long, it houses the main railway functions in its central multi-level span.
- Longitudinal Gallery: The Longitudinal Gallery serves as a corridor through the entire building linking the different areas. It is bordered by commercial spaces, some of which extend over two levels.