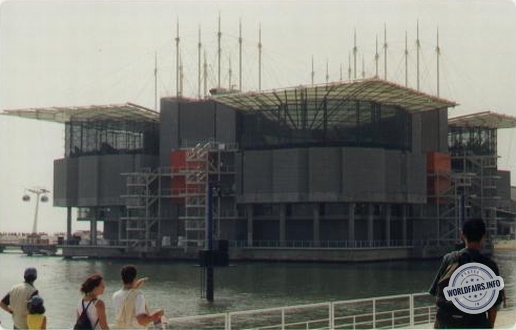 The pavilion of oceans and oceanography is in fact a huge aquarium (the largest in Europe). This building is located in the middle of the water of the Olivais docks, like an island in the middle of the ocean, and was also in the middle of the exhibition park.
This pavilion is actually made up of 2 buildings: the aquarium which seems to float on the water and the vestibule on the other side of the basin which connects the first building via footbridges, evoking the boats which are connected to the mainland of the port by footbridges.
The upper part of the aquarium is surrounded by glass windows and the roof, held in place by steel cables attached to masts, is also glazed.

This building is composed of 5 tanks, the largest of which in the centre contains 6000 m3 of water, the other 4 are located in the four corners of the pavilion, each representing the biosphere of an ocean (Atlantic, Pacific, Indian and Antarctic) and totalling 8000 specimens and 250 different species.

While following the meandering aquarium in the half-light, visitors were accompanied by the sounds of the sea. This sound universe reinforced the illusion that one was under the sea.
This pavilion still exists today.