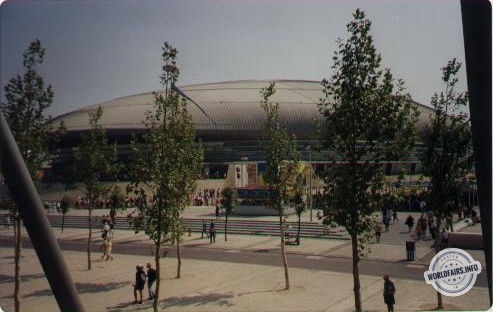 This huge shell-shaped pavilion, which is located between the Quai des Olivais and the Tagus, is the focal point of the exhibition due to its position and architecture. The architects have positioned the pavilion so that it turns its back to the tag, and the spectators enter from the main avenue. The structure of the building refers to the structure of ships at the time of the Portuguese discoveries, and is therefore composed of laminated wooden vaults, with a central crossbeam measuring 114 metres. The general curvature of the rows of seats and the flat central surface of the main hall are also reminiscent of the structure of the ships of the past.

During the exhibition, this building, which has 10,000 seats, is used exclusively as an auditorium for a multimedia show. Later, the multi-purpose hall will be used for sports events, concerts and other performances.

The pavilion presents a sparkling, chronological and humorous show "Utopia - A Brief History of Oceans and Utopias", which uses classical and modern theatrical effects as well as the latest multimedia technologies.

The show consists of 10 "images" that illustrate the history and the main oceanic myths, the spectator travels from the Bing Bang, to the great conquests, to Atlantis... and even witness the birth of the Statue of Liberty.