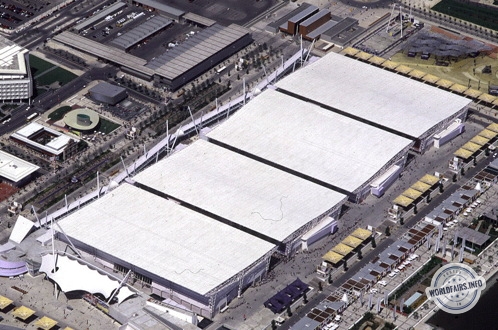 The largest building at EXPO '98 consists of four identical, large rectangular buildings, located side by side and surrounded by different volumes containing entrances, accesses, services, circulation areas, etc. The whole structure is so large that the architects designed a walkway with a conveyor belt to carry visitors from one end of the northern buildings to the other.

This walkway is suspended by steel cables attached to V-shaped masts, so they do not touch the ground and are attached to the halls themselves by steel bars to prevent them from swaying. The walkway is cylindrical in shape with a glass window on each side and along the entire length. At each aisle between the different halls, the walkway offered an exit where visitors could get off to continue their visit.


Next to the first hall is a large canvas, supported by steel cables attached to two large inverted V-shaped poles, which allows visitors to take shelter from the sun.


The height and size of these exhibition halls make them easily identifiable on the exhibition site. These buildings, which are extremely complex in terms of their metal structure, are extremely simple on the inside, which will allow them to house all the foreign participants during the exhibition and to serve as exhibition halls in their own right after the exhibition during the various fairs that the city of Lisbon will be offering. The complexity and architectural interest of these large halls lies in the roof structure, which forms a wave over these four buildings. The roof of each hall is characterised by a "double curvature" structure and is supported by a central pillar and two peripheral pillars on each side of the building. Both the roof and the pillars are made of a steel lattice structure for greater strength and lightness.


The pavilions in the northern zone, although similar, have an approach that is also decorative with various stylistic references despite their large surface area and similarity, which is now possible thanks to today's new technical and technological capabilities.