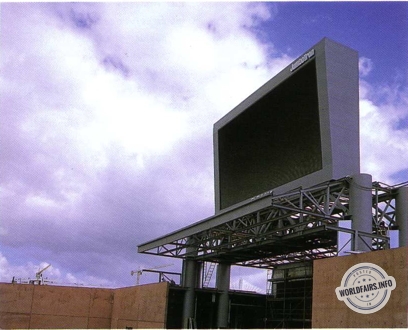 The Sony Plaza was located at the northern end of the Exhibition Park. From the outside, the structure was seen to comprise a curved wall that surrounded the entire stage area which was dominated by a giant screen.

In front of the stage, an open-air amphitheatre followed the ellipse defined by the curve of the wall. Invisible lines radiated from the centre of the ellipse, which was occupied by a dance floor, and terminated in undulating bands hanging from its V-shaped pillars that served as a protective envelope for the various bars.
Three other bars, located under palm trees, were reminiscent of tropical beaches which, in Lisbon during the summer, should prove to be very effective. The same goes for the giant screen that broadcast the frenetic images and sounds of rock concerts that were also taking place on the stage.

Luisa Marques created a light architecture design, which is global, suggestive, and that all focuses on the relationship between the stage / screen and the dance floor / amphitheatre, which extended further outwards, and broke the rigidity of the cube-shaped module by Manuel Salgado.