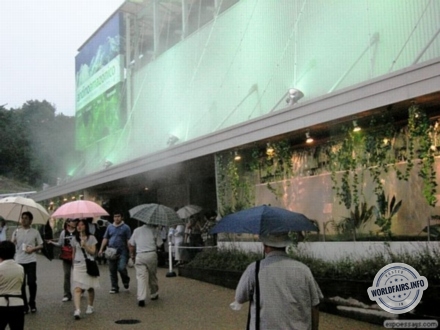 Bolivia, Colombia, Ecuador, Peru and Venezuela, which created the Andean Community, have many commonly shared geographical areas, such as the Andean mountains and the Amazon River, and they are among the 12 most biodiverse countries in the world.
The Andean mountain system surrounded by the Atlantic Ocean, the Caribbean Sea and the Pacific Ocean produces a marine environment rich in freshwater, protecting the large forests in the region, including the Guayana part of the remote mountains, and the greatest biodiversity in the world.
Using such features, the front of the pavilion was woven into a mist, producing the image of the Andean region as a "paradise full of natural wisdom". Nature in the Andean and Amazon region not only provides crops and water but also supports human life globally by cleaning the air. To protect the future of life on earth, the rediscovery of a paradise there is important.
Reaching the top after passing through the seven zones of life in the tunnel, visitors could see various exhibits showing the cultures in the Andean and Amazon region from ancient times until today. There, human wisdom, modern cities, science and various other creations were placed to face the wisdom of nature that produced such things. From there, visitors moved to the balcony to view the landscape of a small area called the "abyss" where city residents first went decades ago. This experience provided an aerial view of the Amazon rainforests and surely amazed visitors.
After the encounter with the supreme natural beauty, visitors could listen to the tales, magic, magical realism and knowledge passed down from generation to generation, and other wisdom of ordinary people.