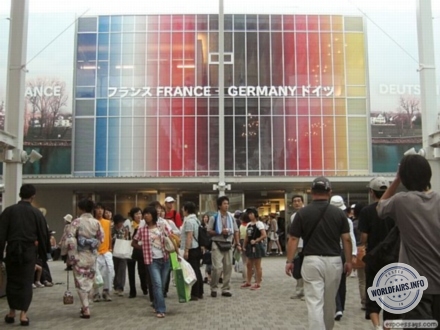 The theme of the German pavilion was "Bionis" proposing the coexistence of nature and technology. "Bionis" was named after bionics, a study to apply natural principles to technology. Based on a communication-oriented concept, the pavilion was a type of experiment with simple explanations, allowing visitors to gain easy knowledge on the subject.

The main item on display in the pavilion was an orbital system, called a "Ride", consisting of state-of-the-art equipment weighing 150 tons. The orbit, running on several levels and totalling 300 metres in length, was traversed by transparent water-drop shaped shuttles called "Experience Drop". Six people could board the shuttle at the same time and they departed at 45 second intervals, moving throughout the pavilion, allowing visitors to see a variety of scenes and exhibits while seated. At first, the shuttle passed through a large, dark and quiet cavern, and then plunged under the sea and up into the heavens, awakening its passengers' five senses. They could also see multimedia scenes, animations and aeroplane wings built with normal evolution, and experience spectacular scenes such as lightning and thunder.
The "Experience Drop" reached the final exhibition area, the "experience laboratory," where exhibition items and two-way communication media were present and where each visitor could participate in the "Bionis" experiences.