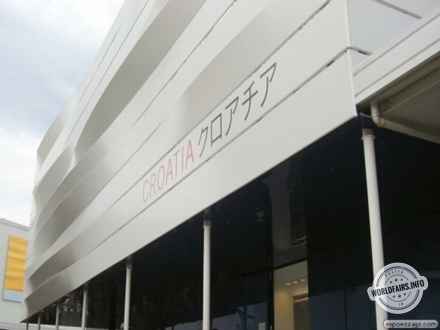 The theme of the Croatian pavilion was "a drop of water: a grain of salt". The structure of a "drop of water" is very simple, but an unlimited number of combinations can be made if other elements and chemical components are added. This is the basis of all life on earth. Just in one drop of water, all the wisdoms of nature are represented.
Since Croatia is a country accepting many stimuli from two large geographical areas - the European continent and the Mediterranean Sea, the country thus represents the combination of water molecules.
On the first floor of the pavilion, a film presented an excursion under the sea in the lower part of the picture and in the upper part, the ancient techniques of salt production were presented.
Salt, a natural spice and preservative, represents wisdom and symbolises moderation and purity. Today, everyone considers salt as a normal and ordinary thing, but historically, salt wars were repeated, and the routes to transport salt were kept secret.
The work to separate salt from sea water and to refine sea water into drinking water are both closely related to the history of people regarding the sea as important.
On the second floor, the whole image of Croatia was presented. Visitors felt as if they were flying over Croatia with aerial pictures taken from a plane of the sea, cities, people and cultures.