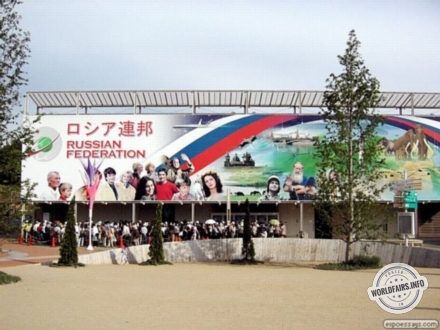 The theme of the Russian Federation's exhibition was "Harmony of the Noosphere," which seeks to promote intelligent human societies that can live in harmony with Mother Nature. For example, there were exhibits on the Russian forests, which account for a quarter of the world's forested areas, and on Lake Baikal, a natural reservoir containing 22% of the world's fresh water. In addition, visitors could appreciate the diversity of minerals mined in Russia by admiring numerous mineral specimens from the collections of Russian masons and jewellers.
For visitors who wanted to take a closer look at an animal that lived more than 10,000 years ago, there was a gigantic adult mammoth skeleton reconstructed by paleontologists after many years of studying the remains of these prehistoric animals in Yakutia in Northern Siberia.
Visitors could learn what it feels like to be in an orbiting spaceship by sitting in a simulator. Other unique exhibits demonstrated the latest achievements and prospects of space development in Russia.
Film exhibitions in the pavilion gave visitors a look at Russian art, from treasures kept at the Hermitage in St Petersburg and the Tretyakov Gallery in Moscow, to performances by the Bolshoi Ballet Company.
Visitors could also get a glimpse of the history and cultural traditions of the people of Russia by looking at their costumes and crafts and learning about their folk customs.
Reflecting the lessons learned from natural and man-made disasters, the exhibition focused on equipment and display technologies for predicting and monitoring dangerous processes taking place in the oceans and in the atmosphere. The exhibition showed projects developed in Russia to promote thermonuclear and hydrogen production for the creation of electricity as well as the use of non-conventional sources of energy. Russian nanotechnologies were also presented, for the first time in an international exhibition, to say that they are used in medicine, ecology, electronics, and many other fields.
The exhibition of the Russian pavilion was intended to demonstrate that mankind must create new societies in harmony with mother nature and join forces with the equipment that this global burden.